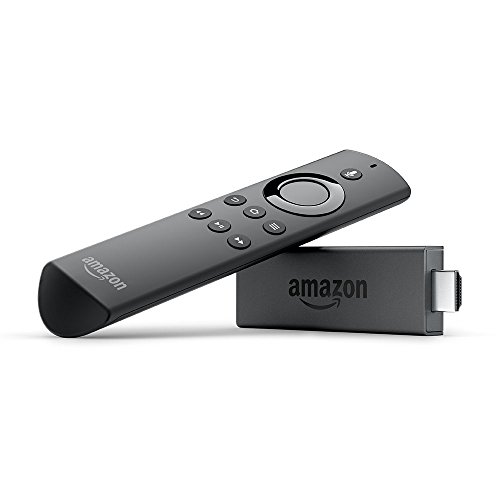 Stream on the Big Screen
Just plug your Fire TV Stick into an HDTV and start streaming in minutes. Use the included Alexa Voice Remote to search across apps and find the best way to watch. The Fire TV Stick has the fastest Wi-Fi and most accurate voice search of any streaming media stick. Shows start faster and stream more smoothly than ever before.

Always Something On
With access to Amazon Video, Netflix, Curzon Home Cinema, All 4, YouTube and more, there are tens of thousands of TV episodes and movies ready to stream. Watch live TV (including sports and news) as it happens. Subscription fees may apply.

Designed Around Your Voice
Use the Alexa Voice Remote to quickly find what you want to watch. Just say ”Find romantic comedies” and Alexa will show you results from apps such as Netflix, Amazon Video and more. Want to skip the opening credits? Say ”Fast forward a minute” within Amazon Video and Amazon Channels.
Alexa, the brain behind Amazon Echo, doesn’t stop there. Simply press the microphone button and ask to play music, place your favourite order from JUST EAT and more. New skills are being added all the time.
Fire TV Stick with Alexa Voice Remote works with smart home devices such as lights, switches, thermostats and more from WeMo, Philips Hue, Hive, Netatmo, tado° and others. Learn more about compatible smart home connected devices, including starter kits for easy setup.

Even Better with Prime
Being an Amazon Prime Member unlocks thousands of movies and TV episodes, including Amazon Original Series, plus ad-free listening to over two million songs with Prime Music. From award-winning series Man in the High Castle and Goliath to great shows for kids such as Tumble Leaf and Creative Galaxy, something is always on.
Amazon Channels is exclusively available to Prime members. Choose from over 40 channels including Discovery, Eurosport Player, ITV Hub+, Hayu and moreThe next generation of our bestselling Fire TV Stick. The most powerful streaming media stick, with the fastest Wi-Fi and most accurate voice search-now including the Alexa Voice Remote.
Over 7,000 apps, games and Alexa skills, including Prime Video, BBC iPlayer, ITV Hub, Netflix, and more. Plus, access millions of websites such as YouTube, Facebook, and Reddit with browsers like Silk and Firefox.
Launch apps and control content with the included Alexa Voice Remote. Simply say ”Launch Netflix” or ”Skip ahead 5 minutes” and Alexa responds. Plus, play music, search for local restaurants and more. Just ask.
8 GB of storage and 1 GB of memory for apps and games, a quad-core processor, plus 802.11ac Wi-Fi for fast streaming and smooth performance.
Easily find what you want to watch with search results from Netflix, Prime Video, and other third-party apps.
Amazon Prime members get unlimited access to Prime Video, featuring thousands of movies and TV episodes, including The Grand Tour, at no additional cost. Plus, Prime members can add over 40 premium channels such as Discovery and Eurosport Player.  Channels are available as individual subscriptions so you only pay for the TV channels you want.
Pick up where you left off. Bring hit shows and movies with you when you travel. Plug your Fire TV Stick into a TV’s HDMI port, connect to Wi-Fi and continue watching.
Play current favourites or quickly discover what to watch next directly from the Home screen.