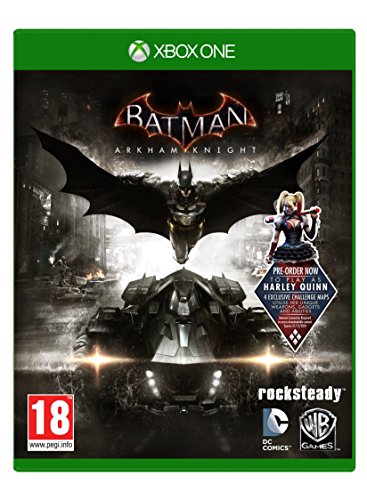 In the explosive finale to the Batman Arkham series, Batman faces the ultimate threat against the city he is sworn to protect. The Scarecrow returns to unite an impressive roster of super villains, including Penguin, Two-Face and Harley Quinn, to destroy The Dark Knight forever. Batman Arkham Knight introduces Rocksteady’s uniquely designed version of the Batmobile, which is drivable for the first time in the franchise. The addition of this legendary vehicle, combined with the acclaimed gameplay of the Batman Arkham series, offers gamers the ultimate and complete Batman experience as they tear through the streets and soar across the skyline of the entirety of Gotham City. Batman Arkham Knight XBOX One Features Be a part of the explosive Finale in the Batman Arkham Series in Batman Arkham Knight. Take to the rooftops and now – the roads of Gotham as for the first time the iconic Batmobile becomes driveable. Face some of Batman’ most notorious foes as the Scarecrow returns to unite Gothams most feared villians. Harley Quinn playable character Become Harley Quinn for the first time ever in an Arkham game and utilize her unique weapons, gadgets, and abilities first-hand. The add-on includes four exclusive challenge maps.Live the complete Batman experience with the introduction of the Batmobile and enhancements to signature features
The Batmobile is brought to life with a new distinct visual appearance and a full range of on-board high-tech gadgetry
For the first time in the series, explore the entirety of Gotham City in a completely open and free-roaming game world
More combat moves and high-tech gadgetry than before, including ’gadgets while gliding’ ability and upgraded utility belt
Fully immerse yourself in the chaos in the streets, taking down individual villains or pursuing the core narrative path