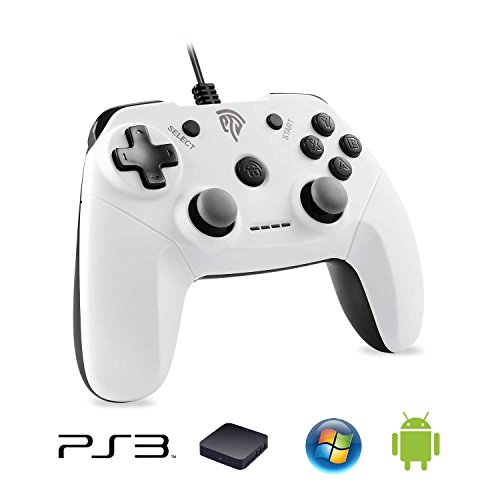 Please note this is only for PC PS3 and Android, Microsoft PC version of Xbox 360 but not support Xbox 360 / Xbox One / Mac OS.

Fire Buttons
• There are six keys including to control other action. L-trigger and R-trigger are used analog signal. It can be set in special function.

Function Buttons
• Pressing button 8 can start or pause. Button 7 is ”BACK”.

Left and right 3D stick
• Can be set according to your favorite.

MODE button
• ” Home” or Converse mode
• Turbo and Clear setting
• 7.1 Hold the key which you want to set turbo, then press turbo key one time. Then it is set in Turbo station.
• 7.2 Hold the key, press turbo again, it can clear turbo setting.

Operation:
• 1. Turn on your device via USB port.
• 2. Insert 2 AA batteries to the gamepad then press MODE within 15 seconds, 4 port Led will rapid flash. (Batteries Not included in the package.)
• 3. One Port Led lights means paired successfully

Package include:
• 1 x Controller
• 1 x Manual
The game controller supports Windows, Vista, TV box, PS3 and Android (version 4.0 or above, and the device must fully support OTG function). Supports Microsoft PC version of Xbox 360 but not support Xbox 360 / Xbox One / Mac OS, all games for windows is supported.
Ergonomic Design. Asymmetric button layout and anti-slip design provides a more comfortable gaming experience
Dual-vibration. The two electric motors vibrates when skidding or being shot at making playing exciting and thrilling. The controller vibration can be turned on and off within game settings
Adequate buttons with good flexibility. TURBO and TRIGGER buttons make you play in total comfort and convenience
Simple plug-and-play USB connection with flexible cord to provide stable and extension of game performance