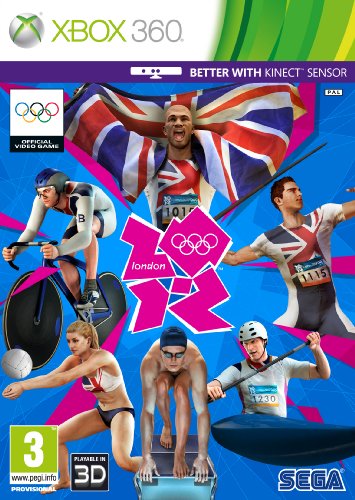 London 2012 The Official Video Game Of The Olympic Games will allow gamers to create their own moments of sporting history and fame by experiencing the thrill and adrenaline rush of the events and disciplines that will be a part of the London 2012 Olympic Games.

Over 30 Olympic events have been authentically recreated in their official Olympic arenas against the capital’s iconic skyline, with a host of new disciplines making their debut in London 2012. Keirin (Cycling) at the Velodrome, 10m Synchronised Platform (Diving) at the Aquatics Centre and Trampoline at North Greenwich Arena are just some of the new sports that will bring the atmosphere of the Olympic venues to life. Take yourself from the spectator seat, to the race track, swimming pool, gymnastics arena and more and feel the adrenaline of the athletes whilst you compete for that coveted gold medal for your country.

For the first time in an officially licensed Olympic video game, London 2012 will support motion control in a number of different events, bringing you even closer to the Olympic Games. Budding sports heroes will have an even more realistic way of competing in a number of events that are compatible with PlayStation Move and Kinect including 110m Hurdles, Beach Volleyball (Kinect only) and 25m Rapid Fire Pistol (Move only). London 2012 also contains a number of game modes including single player Olympic Games mode, online and offline multiplayer and party play.

In another first for this iteration of the video game, London 2012 will take the world’s biggest sporting event online in the form of global leaderboards. The leaderboards will track personal medals gained whilst playing online, with each personal medal won added to that nation’s medal table. Every medal won will help to improve a nation’s standing in the leaderboards, creating even more moments of sporting glory and fame across the globe.

Go for Gold: Compete in over 45 events, including all the blue ribbon events plus some all-new events to Olympic video games offering the ultimate depth and variety (Includes Motion Control and Party Play events)
More ways to play: Compete in a wide range of challenges and game modes including Olympic Games, Events Mode, Online Mode and Party Play
Feel the Burn: For the first time ever in an Olympic Games video game, play using Motion Control with a dozen different events enabled for PlayStation Move and Kinect for Xbox 360
Compete for Global Glory: Take the competition online with leader boards tracking personal medal counts, and earn National Pride points with each medal you win for your country – keep playing and improve your nations standing!
The Ultimate Olympic Games Experience: Get closer than ever to the experience of the Olympic Games with reactive commentary, super-realistic graphics and TV style presentation