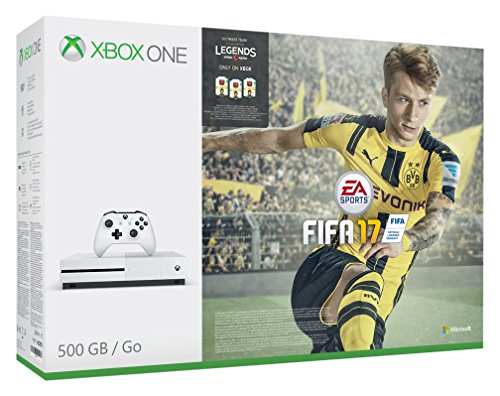 Own the pitch
Powered by Frostbite, FIFA 17 transforms the way you play, compete and emotionally connect with the game. Immerse yourself in authentic football experiences thanks to the sophisticated new game engine. Get to know football players like never before – from the way they think and move to how they execute in attack. FIFA 17 lets you own every moment on the pitch.

The Journey
For the first time ever in FIFA, live your story on and off the pitch as the Premier League’s next rising star, Alex Hunter. Play in any club in the Premier League for authentic managers and alongside some of the best players on the planet. Experience brand-new worlds while navigating your way through the emotional highs and lows of The Journey.

Greatest games in Xbox history
All the blockbusters are on Xbox One, including Gears of War 4, Halo Wars 2, ReCore and Crackdown 3.3 Plus, all the great franchises like FIFA 17, Call of Duty: Infinite Warfare and Titanfall 2. And thanks to backward compatibility, Xbox One is the best place to play classic Xbox 360 games.4

Play together with Gold
With the most advanced multiplayer across Xbox One and Windows 10 PCs, Xbox Live is the world’s premier gaming community. And with Xbox Live Gold, you get free games, exclusive member discounts, up to 50-75% off games in the Xbox Store, and more.5

Xbox Play Anywhere
Anywhere is a great place to play. Experience the freedom to play your games wherever you want. When you own an Xbox Play Anywhere digital title, it’s yours to play on Xbox One and a Windows 10 PC-no additional cost.Own the Xbox One S FIFA 17 Bundle (500GB)
Experience authentic, true-to-life action in FIFA 17, included as a full game download with three Loan Legends
Powered by Frostbite, FIFA 17 introduces players to new football worlds, characters full of depth and emotion, and FIFA 17’s The Journey, a new narrative-driven mode
Watch 4K Blu-ray movies and stream 4K content on Netflix and Amazon Video
Experience richer, more luminous colors in games and video with High Dynamic Range
Get one month of EA Access and play upcoming EA games on Xbox One for a limited time before they’re released
As an EA access member, play more than 20 full EA games as much as you want